this is the one game that i can say, based on its themes, is absolutely worth playing. it is the only game that i know that actually delves into subjects of real world importance. just look up "deux ex redpill" on youtube to get the idea. yea the graphics are shit and the shooting is wonky and the stealth is primitive, but the game still holds up very well today, even better today only because of its themes. 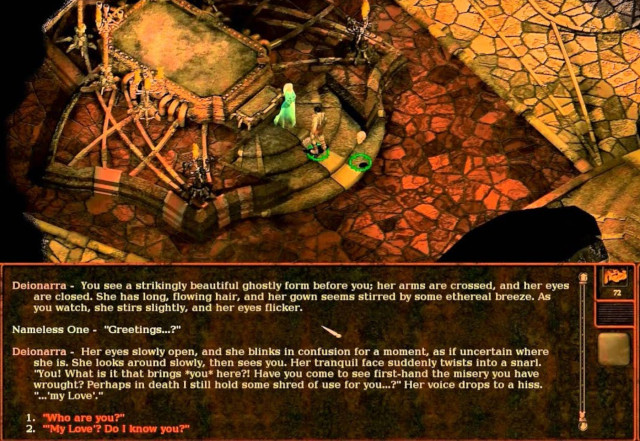 this game is so high at the pinnacle of writing for games that it's more of a book than a game. every single turn of it has something philosophical, whether its the factions like the dustmen who wish to avoid rebirth and experience true death, the sensates who try to experience as many sensations as possible, or even the main question of the game which is "what can change the nature of a man?" this video explains it very well https://invidio.us/watch?v=iblKGNtpEnE. the character you play as is an immortal who, instead of dying, reanimates into the same body with no memory and a different personality every time he seemingly dies. this has been going on for who knows how long until the cycle breaks and he stops losing his memories when he dies, which sets off the events of the game. however, the problem with this game is that the gameplay is fucking terrible. the combat involves just swarming shit with all your teammates and smacking the fuck out of it until it dies, hampered by the terrible pathfinding and overall zero satisfaction in how the combat feels. there is little way to heal with spells except for one character, but she's shit at it anyways. how you heal is you pause the game and pass around a massive stack of 100 healing items to anyone in your party who needs it, put the stack back into the main characters inventory, and then resume combat until ten seconds later you have to heal all over again. nevertheless combat is actually rare in the game, and you'll spend most of the time reading, and it is indeed an excellent read, until the later part of the game where it just takes a giant shit of nonstop combat that is grueling unless you spent all your money on hundreds of healing items.

understand that for anyone who is seeking to become an 'artist' on their own, you ought to learn from toby fox. he already accomplished it, and undertale is a shining example. the characters are well written and likeable and the music is great. gameplay is honestly too easy unless you fight the hard bosses, like sans who has the best fight in the entire game. you might think this game is 'gay' or whatever, and i thought the same going in (i had a pirated copy so i said fuck it and tried it, sorry toby but i promise i'll pay for deltarune unless the covid stayed in my system and resurfaces and kills me), but i was pleasantly surprised that it's actually a great game.

it's just undertale but somewhere else so i'm recommending it too

this is the only game i can recommend based purely on the gameplay. it is a great and novel experience to learn the strange controls and to master them. many people are put off by this game because of the controls, but i am telling you that learning how to walk and use your inventory and crawl around and lean is absolutely fantastic. it will take you a few hours, but the games progression is unmatched, so when you are able to master the controls you'll be in situations where you'll be glad that you did. and keep in mind, how complicated yet great the controls, gameplay, level design, etc all are in a game released in 1994.


GAMES THAT INFLUENCED ME BUT I DON'T RECOMMEND 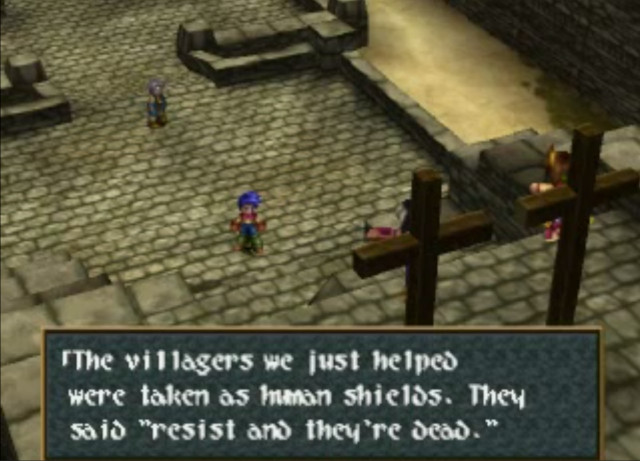 my favorite game. the story is fucking insane. this was all i played when i was a little kid so on all levels this game's aesthetic is burnt into my fucking soul. the main theme of the story is what it means to be a hero, but fuck that, it's got fucking terrorists who summon demons, cowboys and western men, child sacrifice, mass shooters, little kids having to fight off the mass shooters (who are also terrorists trying to conquer the planet), global political manipulation, entire nations turned into salt, and that's just in the first disc (this game is rated E). i'm not even going to go into the second disc because the twist in it is so fucking massive that i'd hate to spoil it. however, the translation from japanese is terrible; it is still understandable, although quite abstract at times. the combat is slow and also way too easy, but those are my only complaints as the graphics are perfect, the music is fantastic, and the characters are all excellently made, and far better than the characters of the first and third games. i don't recommend this though, because it's a very long game, which means it takes a while to get to the most worthwhile part of it which is the well composed and insane story. if you have 30+ hours that you are willing to spend going through dungeons (well designed dungeons, with a few bullshit puzzles but still) and slow and easy combat so you can get to the next extremely politically incorrect, difficult to understand, and utterly ridiculous and insane plot piece, then hell yea go for it. i might not have enough knowledge to make a definitive statement, but in my humble opinion, the writing of this game makes it the deus ex of jrpgs. if you know a better game to suit that statement leave a comment on my guestbook. 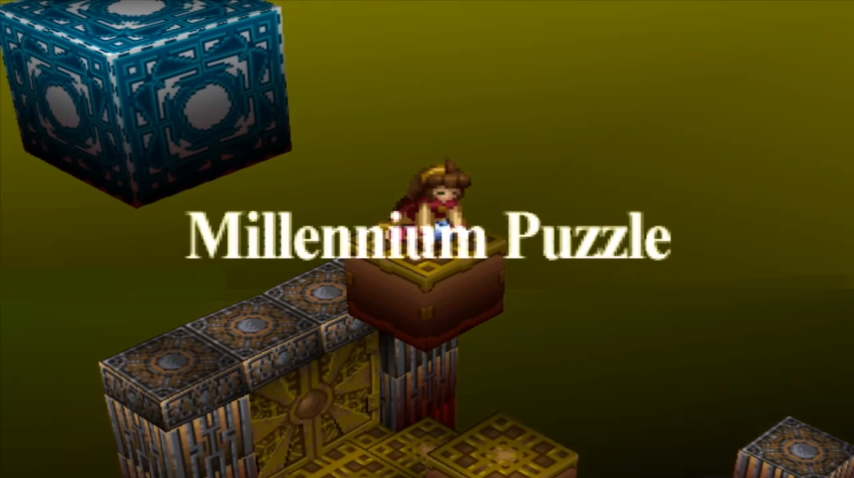 i knew there was something golgothic about times new roman 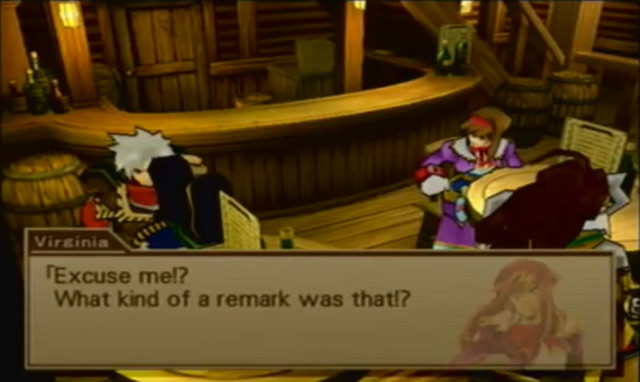 hella western jrpg. it's what rawhide kobayashi plays after he's finished training with the lasso and the branding iron. 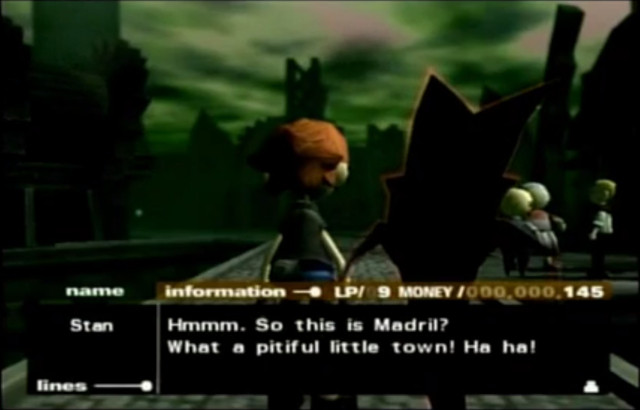 graphics are fantastic because of the art style and it still holds up, but everything else about the game isn't that great. writing is witty but isn't phenomenal, although the reveal near the end concerning the makeup of the game's world is interesting. still i played this a lot as a kid, and what stuck with me was the overall goofiness and art style.

very dark jrpg, RATED M FOR MATURE, graphic depictions of violence and disturbing enemies, i mean look at this shit. 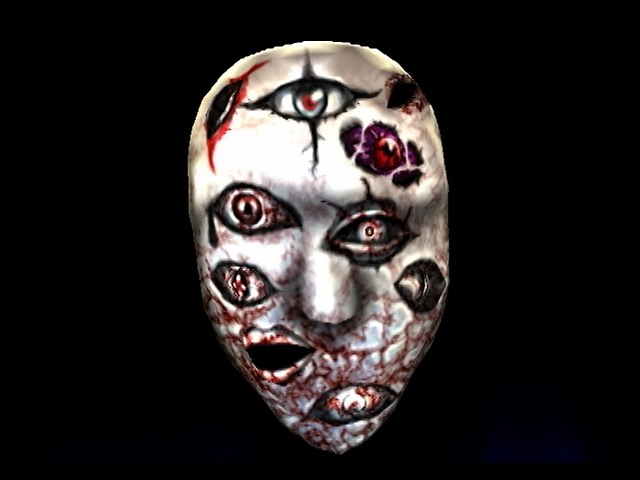 The creation God's mistake. It resents God and destroys anything that resembles or represents God.

i played this when i was like 5 it was awesome.

masterful stealth, audio, and level design. environments and lighting hold up great but the people are like walking pieces of laffy taffy. not much else to say honestly, thief is just a very well made game.

same as thief but without the stealth because it's an fps a lot like bioshock which was heavily inspired by it. again, very well designed game, but i don't recommend it because it wasn't a great experience learning how to play it like system shock 1 was. 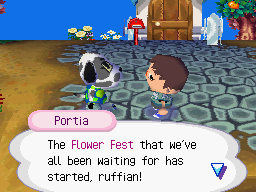 after a long hard day at school instantly completing all the easy ass work for retards while forced to sit at a desk facing a wall away from the other kids and being ostracized by them and having zero friends and somehow getting poor grades in reading even though all i did was fucking read all day because i had no friends i would come home and do pretend work and have pretend friends on this game. if you really wanna play an animal crossing game just play the new one idk what it's like but it's probably better, this game's ps1-esque graphics are forever wobbling and twitching within my soul, the lack of floating point precision symbolizing my suffering.

as you can see i tend to like games based more on their art style and stories rather than gameplay, not to say the gameplay isn't important, but it's the writing and art that give the gameplay actual purpose. i hope i was able to convey this to you with these recommendations.